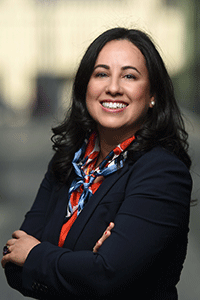 Dr. Carolyn Rodriguez utilizes her training as a psychiatrist, neuroscientist, and clinical researcher to innovate rapid-acting treatments to relieve the suffering of patients with severe mental illnesses, including Obsessive-Compulsive Disorder (OCD). She has led landmark clinical trials that pioneered new targeted treatments and investigated the role of glutamatergic and opioid pathways. As the Director of the Translational Therapeutics Lab and Assistant Professor in the Department of Psychiatry and Behavioral Science at Stanford, she developed methods that combine in vivo drug infusions with magnetic resonance spectroscopy (MRS), functional magnetic resonance imaging (fMRI) and electroencephalograpy (EEG) to map human brain circuit dysfunction in real time. This experimental medicine approach is critical to understanding the brain basis of psychiatric illnesses and will transform mental health care.

Carolyn serves as Associate Chair for Inclusion and Diversity in the Department of Psychiatry at Stanford, Vice Chair for the Research Council of the American Psychiatric Association, Vice Chair for the International OCD Foundation Research Symposium, and Director, Executive Board of International College of Obsessive Compulsive Spectrum Disorders. She has won several national awards, including most recently, the 2017 Eva King-Killam Award for Outstanding Translational Research. Her research has been highlighted by organizations including NPR, PBS, New York Times, ABC News, NBC News, Newsweek, Smithsonian, and Time.com. To educate the public on research findings and resources for clinical care, Carolyn contributes articles for Huffington Post and Harvard Business Review.

Early Test Shows: Experimental Drug May Have Potential to Relieve OCD Symptoms Quickly and with Few Side Effects