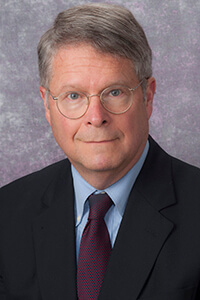 Director of the Aging Institute of UPMC

Director of the John A. Hartford Center of Excellence in Geriatric Psychiatry

Charles F. Reynolds III, MD, is internationally renowned in the field of geriatric psychiatry. His primary research interests focus on mood, grief, and sleep disorders of later life, with a particular focus on mental health services in primary care, improving treatment strategies, depression prevention, and promotion of brain health in older adults. In addition to his national presence, Dr. Reynolds cofounded the Global Consortium on Depression Prevention, a network of investigators in North America, Europe, Japan, Australia, and New Zealand. Currently, he leads an NIMH-sponsored project to develop scalable depression prevention strategies for use in low-resource countries. In this context, he travels annually to India to work with his team at the Goa Medical College. He has also served as a visiting professor in psychogeriatrics in the Netherlands, Brazil, India, Japan, the United Kingdom, France, Germany, Australia, and New Zealand, attesting to his now global impact on the field.

Dr. Reynolds has been named several times as one of The Best Doctors in America and is the 2012 recipient of the APA Jack Weinberg Award for lifetime contributions to geriatric psychiatry. Dr. Reynolds has served on several gubernatorial commissions in the Commonwealth of Pennsylvania related to the health and well-being of seniors living with Alzheimer’s disease and related dementias. He also has served as chairman and member of several research review committees at the NIMH, as a member of the National Advisory Mental Health Council of the NIMH, and as President of the American College of Psychiatrists, the American Association for Geriatric Psychiatry and the American Foundation for Suicide Prevention. He has served as a member of three Institute of Medicine panels dealing with suicide prevention, sleep disorders, and the nation’s geriatrics workforce.